THE GOLDEN AGE OF THE ATLANTIC
​PART 1 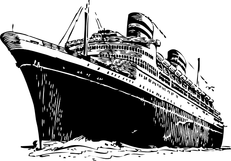 Vadim Yurchuk,  Riga, 2008
"THE GOLDEN AGE OF THE ATLANTIC" - PART 1
​“Development of transatlantic passenger shipbuilding in the second half of the 19th and the first half of the 20th century”.
Historical Overview.

With the rapid development of industry and technology, the world launched a unique century. A century of stunning imagination and spectacular romanticism, which was filled with fantastic artistic colors and bold engineering solutions.
​This period is called – “The Golden Age of the Atlantic”.